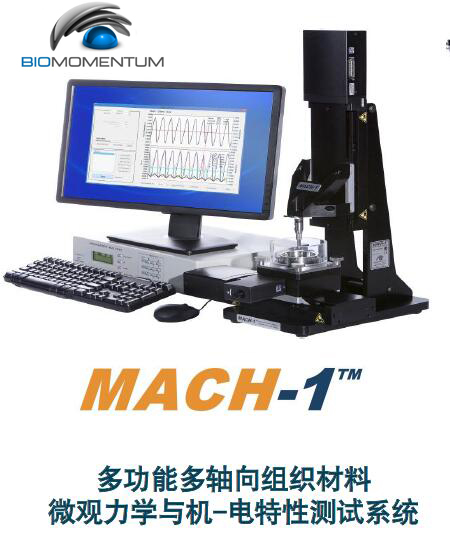 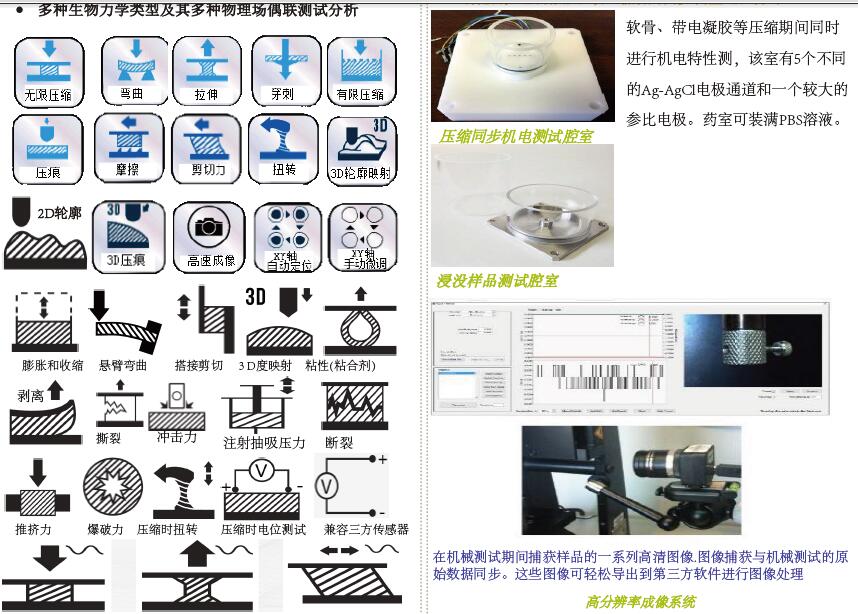 Articulation-Induced Responses of Superficial Zone Chondrocytes in Human Knee Articular Cartilage - Effects of Shear and Sliding
Hsu FH, Hui AY, Chen AC, Lotz MK and Sah R
Orthopeadic Research Society Annual Meeting in Las Vegas, Abstract 0256
Introduction: During daily physical activities, joint articulation results in 3-10% compression in its overall thickness. There is also consensus that articulation is a combined process of shearing and sliding, with relative rotational and translational motions between femoral condyle and tibia cartilage at least at the millimeter scale 2,3. The macroscale motions in the joint which translates to microscale tissue deformation have been assessed in vitro to range from 2.8 to 41.0% depending on the tissue state and lubrication 4 . Biologically, dynamic shear at small amplitudes (±3%) markedly stimulates PRG4 secretion by immature bovine cartilage disks, but little evidence has been provided for similar effects in human cartilage, perhaps due to insufficiently large amplitudes of stimulation 5 . A prior study on the effects of torsional shear on chondrocyte apoptosis has suggested that superficial zone (SZ) cell apoptosis occurs in bovine explants when sheared without lubrication 6 . However, it is unknown whether (1) the degree of SZ cell death and amount of PRG4 secretion is a function of shear and sliding amplitudes and (2) how much resultant tissue deformation and sliding occurs during the chosen method of shear. Therefore, the hypothesis for this study was that articulation induces an amplitude-dependent effect on cartilage superficial zone health and responses, and that the variations in responses are due in part to the extent of tissue shear. Thus, the aims were to assess the effects of graded levels of articulation on chondrocyte viability and PRG4 secretion, and to relate these biological responses to the level of tissue shear.

Methods: A total of 25 human articular cartilage disks (2mm diameter, 1.1mm thick) were harvested from the patellofemoral groove of each of 9 cadaveric knees of donors spanning a wide age range [n=3 Young (<30 yrs), 19, 26 and 29 yrs; n=6 Old (>50yrs), 51, 54, 55, 61, 64, and 66 yrs] without evidence of osteoarthritis; the samples were prepared to include the articular surface, and from regions of tissue with a macroscopically intact articular surface. Disks were incubated in medium supplemented with 10% FBS and 25 ?g/ml ascorbate. On day 3-5, some disks were subjected to mechanical articulation at Low, Mid, or High amplitudes, and others left free-swelling (None). Immediately after treatment, some disks were analyzed for chondrocyte viability at the articular surface. Other disks were incubated for two additional days to assess effects of Low and High articulation on subsequent PRG4 secretion. Some of the donor-matched disks were analyzed mechanically to assess the effects of Mid and High articulation on shear strain and shear stress. Mechanical stimulation. Articulation was implemented at sliding amplitudes of ±100?m, ±500?m, or ±1000?m using a sinusoidal 1Hz waveform in order to simulate effects of Low, Mid, or High levels, respectively. The articulation was imposed for 400 cycles and superimposed upon 20% static compression using a Mach-1 mechanical tester (Biomomentum) with a surface-finished polysulfone platen for articulation against the articular surface 7 and a roughened surface and trough to stabilize the deep cartilage surface. Multi-axial load was recorded. Other disks were maintained free-swelling (None) to serve as control. SZ cell viability analysis. Disks were stained with Live/Dead® (Invitrogen) immediately after treatment, and en face images of the disks were taken at 10x magnification with a fluorescent microscope. The resulting live and dead images were analyzed using a custom image-processing program to determine the number and percentages of live and dead cells. PRG4 protein secretion.. Conditioned medium, collected during the two days of incubation after articulation, was analyzed for PRG4 by ELISA. Biomechanical analysis of tissue shear. The response of cartilage disks was then assessed by video analysis. Videos were recorded with a Nikon D90 SLR digital camera, fitted with a macro lens, and frames analyzed for disk and platen position to determine shear deformation during imposed articulation. Statistics. Summary statistics are presented as mean ± SEM, with n = # of cartilage disks per experimental condition per donor knee, and m = # of donors, so that n*m = total cartilage disks per condition. Data that ranged over an order of magnitude were log10 (1+Y) transformed and percentage data were arc sine transformed prior to statistical analyses to improve normality and homoscedasticity. The effects of mechanical treatment on SZ cell death was assessed by 1-way ANOVA and post-hoc Tukey test. Linear regression of both maximum shear stress and strain to cell death were performed. The effects of age and mechanical stimulus on cartilage PRG4 secretion were assessed by 2-way ANOVA with donor as a random factor.

Results: Articulation induced chondrocyte death in the superficial zone in an amplitude-dependent manner (Fig. 1). In control samples and those subjected to Low articulation, SZ cell viability was high at 90-95%. Mid and high amplitudes of applied articulation resulted in a reduction of viability by 20-25% (p<0.01). Cartilage PRG4 secretion was modulated by age group (p <0.001) and articulation stimulus (p<0.001) in an interactive manner (p<0.01, Fig. 2). In the absence of applied mechanical stimulation, PRG4 secretion by cartilage from young donors was higher (+4.7 ?g/(cm2?day), p<0.05) than that of old donors. With mechanical stimulation, higher articulation resulted in higher PRG4 secretion (+4.0 and +6.8 ?g/(cm2?day), respectively, for low and high articulation) in young donors, but did not have a discernible effect on cartilage from old donors (-0.04 and -0.4 ?g/(cm2?day), for low and high shear, respectively). Cell death and cartilage PRG4 secretion responses were associated with donor-specific tissue mechanics ( Fig. 3 ). Positively correlations were found between cell death and shear stress (Fig. 3A & C, p<0.05) as well as PRG4 secretion and shear strain (p<0.05). Trends were observed between cell death and high shear strain, but were not significant (Fig.3B, p=0.10).

Discussion: The finding that high levels of cartilage shear stress and/or strain can lead to cell death suggests the susceptibility of cartilage to states when lubrication is deficient and/or tissue asperities lead to high articulation-induced tissue shear. On the other hand, the stimulated PRG4 secretion response suggests that the remaining cells can exhibit a feedback response, attempting to counter the excessive shear, as suggested previously 5 . The correlation of biological effects with tissue-specific biomechanical properties suggests that age-related variations in human articular cartilage properties could be involved in variations in mechanobiology. The lack of mechanical responsiveness of human articular cartilage with aging may contribute to the increased incidence of osteoarthritis with aging.

Significance: The susceptibility of articular cartilage to shear-induced cell death suggests that mechanical protection strategies may be helpful to prevent subsequent development of osteoarthritis. Further understanding of the mechanobiological alteration of human cartilage with aging may involve both mechanical properties of the tissue matrix as well as biological variations in the chondrocytes. 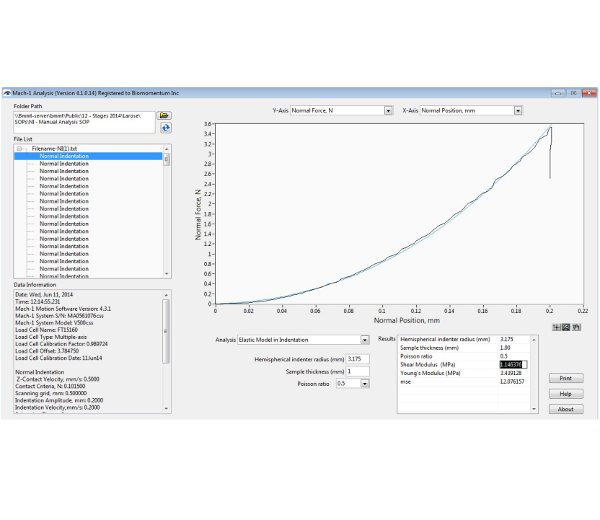 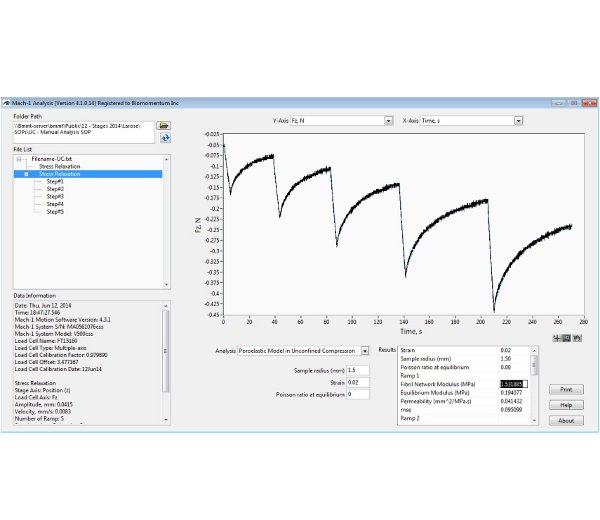 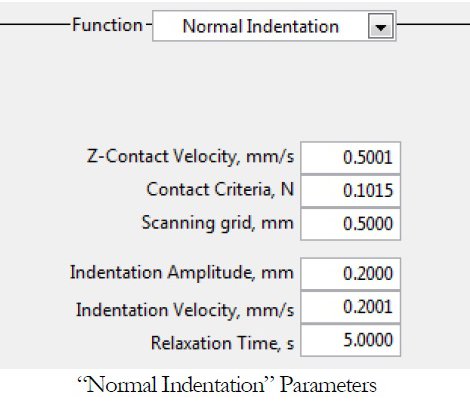 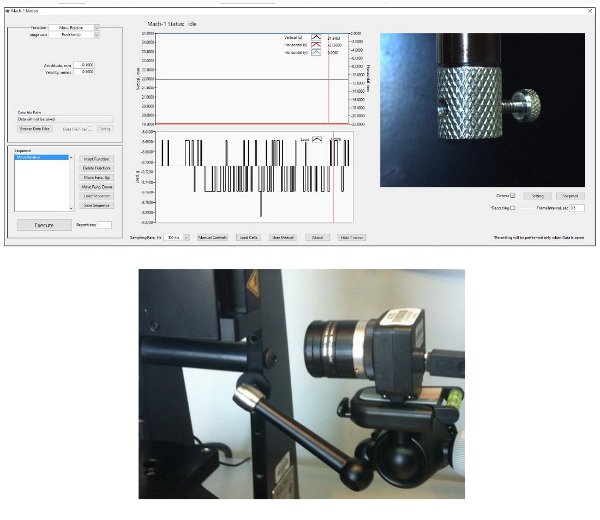 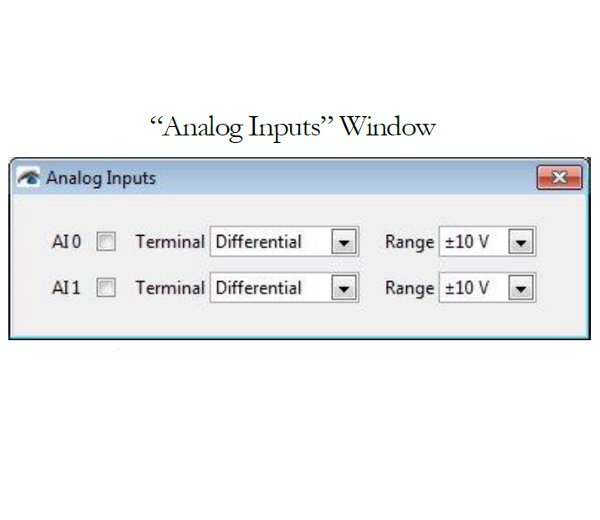 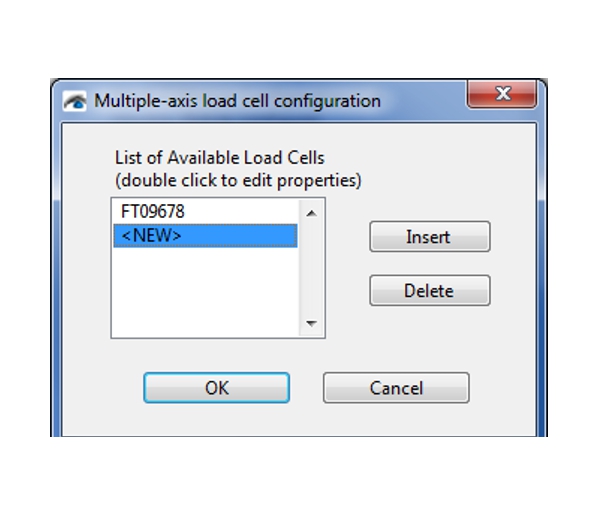 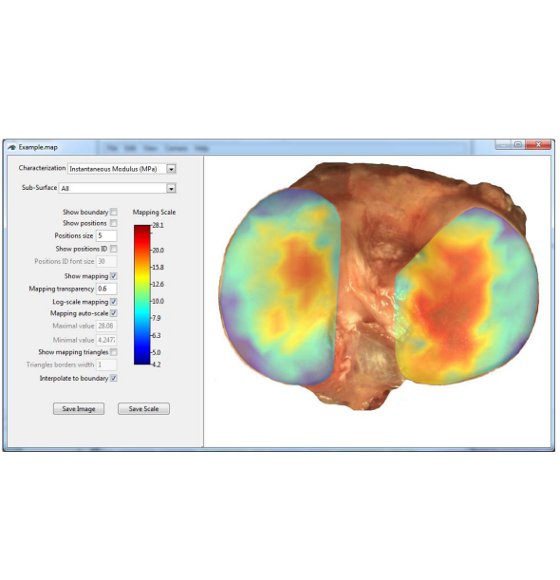 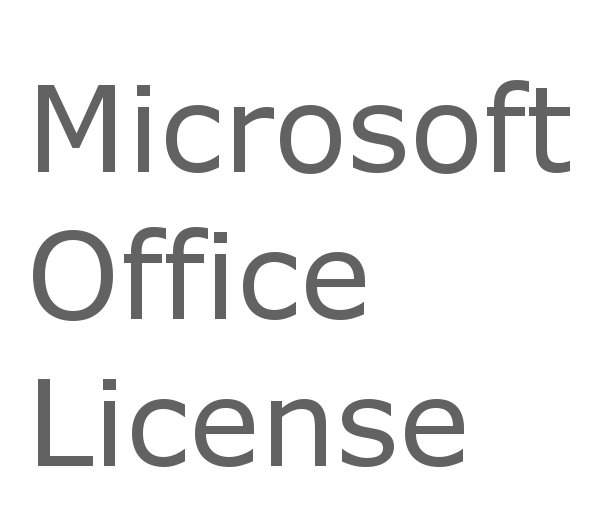 This test method can be used to determine the stress-strain properties of an adhesive in shear and to establish the proportional-limit of the stress-stain relationship. This data may be useful for the design and analysis of adhesively bonded joints.
This test method is not intended to determine adhesion characteristics of an adhesive to a particular substrate;...Read More
ASTM D5748 - Standard Test Method for Protrusion Puncture Resistance of Stretch Wrap FilmASTM International, West Conshohocken, PA, 2012, www.astm.org
Significance and Use

Puncture resistance is very important in end-use performance of stretch wrap film used in consumer and industrial product applications. Puncture resistance is a measure of the energy-absorbing ability of a stretch wrap film in resisting a protrusion. The test method is designed to provide the user with a means of measuring the stretch wrap film's puncture...Read More
ASTM D575 - Standard Test Methods for Rubber Properties in CompressionASTM International, West Conshohocken, PA, 2012, www.astm.org
Significance and Use

These test methods are useful in comparing stiffness of rubber materials in compression. They can be used by rubber technologists to aid in development of materials for compressive applications.

These test methods provide a quantitative measure of the pressure-sensitive tack property of an adhesive.
These test methods are designed to measure the tack property of the adhesive mass. The tack of a given adhesive varies depending on the backing (generally, stiffer backings lead to higher values).
Theses test methods are suitable for quality control...Read More
ASTM D624 - Standard Test Method for Tear Strength of Conventional Vulcanized Rubber and Thermoplastic ElastomersASTM International, West Conshohocken, PA, 2012, www.astm.org
Significance and Use

Vulcanized rubber and thermoplastic elastomers (TPE) often fail in service due to the generation and propagation of a special type of rupture called a tear. This test method measures the resistance to tearing action.
Tear strength may be influenced to a large degree by stress-induced anisotropy (mechanical fibering), stress distribution, strain rate, and...Read More
ASTM D638 - Standard Test Method for Tensile Properties of PlasticsASTM International, West Conshohocken, PA, 2014, www.astm.org
Significance and Use

4.1 This test method is designed to produce tensile property data for the control and specification of plastic materials. These data are also useful for qualitative characterization and for research and development.
4.2 Some material specifications that require the use of this test method, but with some procedural modifications that take precedence when...Read More
ASTM F1306 - Standard Test Method for Slow Rate Penetration Resistance of Flexible Barrier Films and LaminatesASTM International, West Conshohocken, PA, 2016, www.astm.org
Significance and Use

4.1 Penetration resistance is an important end-use performance of thin flexible materials where a sharp-edged product can destroy the integrity of a barrier wrap. This will permit package entry/exit of gases, odors, and unwanted contaminates, causing potential harm to the product and reducing shelf-life. Material response to penetration will vary with numerous...Read More
ASTM F1538 - Standard Specification for Glass and Glass Ceramic Biomaterials for ImplantationASTM International, West Conshohocken, PA, 2009, www.astm.org
Abstract

This specification covers the material requirements and characterization techniques for glass and glass-ceramic biomaterials intended for use as bulk porous or powdered surgical implants, or as coatings on surgical devices, but not including drug delivery systems. Glass and glass-ceramic biomaterials should be evaluated thoroughly for biocompatibility before human use....Read More
ASTM F1717 - Standard Test Methods for Spinal Implant Constructs in a Vertebrectomy ModelASTM International, West Conshohocken, PA, 2015, www.astm.org
Significance and Use

4.1 Seal strength is a quantitative measure for use in process validation, process control, and capability. Seal strength is not only relevant to opening force and package integrity, but to measuring the packaging processes' ability to produce consistent seals. Seal strength at some minimum level is a necessary package requirement, and at times it is...Read More
ASTM D2979 - Standard Test Method for Pressure-Sensitive Tack of Adhesives Using an Inverted Probe MachineASTM International, West Conshohocken, PA, 2016, www.astm.org
Significance and Use


This test method provides a quantitative measure of the pressure-sensitive tack of the adhesive.
The method is designed for the adhesive mass itself and is suitable for measuring the tack of pressure-sensitive adhesives for use on both rigid and flexible backings.
This test method is suitable for quality control and research purposes.
Biomechanics and MechanoBiology of Human Cartilage ArticulationHsu FH, Alonso E, Raleigh AR, Saleh AA, Masuda K, Lotz MK, Chen AC and Sah ROrthopeadic Research Society Annual Meeting, 2016, Orlando, USA, Poster abstract 1428
Introduction: During joint articulation, cartilage, particularly that near the articular surface, undergoes a complex combination of compression, shear, and sliding.1,2 In vitro analyses have focused on cartilage biomechanics in response to relative surface movement at a constant velocity after startup. However, joint movement typically involves variability in the relative surface velocity....Read More